Why do I do this” I asked myself on Saturday morning when I got up.  I had a 6 hour drive ahead of me, to Rochester NY to run a 12 hour night race – the Candlelight 12 Hour.  At 7 am the idea of starting a run at 7pm and running through the night held zero appeal and not a little bit of dread.  Every big race holds both for me – the “why do I do this” question is not a new one, but a night race is a special kind of bad because I have all day to contemplate what’s ahead of me.  I had some added pressure with this one, that I’d added myself – which was, I really wanted to do well.  Well, I wanted to win.  And with the training I’ve been doing, I thought that there was a possibility it could happen.

If anyone scrolls back in time in my blog, you’ll see that I did this race last year, in its inaugural year, but I did it as my last long training run before my first 100 miler.  So, I didn’t really race it, per se, but rather ran for 35 miles before stopping to volunteer and then get in some final walk miles.  This year I had every intention of racing it.  I’ve had a couple of really solid races this year already with Winter Beast of Burden 100 and Dawn to Dusk to Dawn 24 hour, but I thought that this might just be my “A” race of the year.

Many many many things have changed in my life since last year's race.  I've run 4 races over 100 miles.  I've gotten divorced, moved from upstate NY to the DC area, and started a new job.  I've begun a new relationship...  That last one actual had a direct impact on today's race, because unlike any race I've done before - I brought company.  My boyfriend Tony had originally planned to just accompany me to the race and crew, but upon hearing that walking was possible, he signed up to just test himself and see how many miles he could do.

It was really great to have company on the drive up to the race because it allowed me to get my mind off my pre-race angst.

Which lead to the initial question... "Why do I do this?".

Despite an incredibly solid coupe of months of training, as the race approaches I just start feeling a greater and greater sense of dread.  I feel like I am stiff and slow and fat and like I don't know how to run.  Who am I kidding, calling myself  a runner?  And just what the HELL am I thinking, with regarding to doing it for TWELVE HOURS?

As we get within an hour of the race venue I get quieter and quieter.  Something needs to be done to find my inner runner.  Tony gives me permission to take over the stereo, so I hook up my phone and pull out my "Running Fast" playlist.  I blast it, lean my head back into the seat and close my eyes.

Oh, oh, oh, oh, oh, sometimes I get a good feeling, yeah...
I get a feeling that I never never neer never had before, no no...
Woke up on the side of the bed like I won
Talk like a winner, my chest to that sun...

And just like that...  I'm starting to find my inner runner.  Good.  This is good.

It is even better when we arrive and start to see people I know.  I had told Tony what an amazing community this is.... the intense friendliness of the people, their passion, their stories and journeys.  I was so happy that the first of my ultra friends for him to meet were Bill and Wanda Schubmehl - some of my very favorite New York peeps with their spirituality, pragmatism and dedication - not to mention some beautiful writing styles.  They'd been here last year and figured into that experience as well.

We arrived in plenty of time to set up our tent and our gear...  I said hello to everyone I recognized - Dave Farrands and Dave Weiss, Mike Valone, Gary and Katherine, Lauren Idzik, Gil...  One of the folks I was missing intensely was my friend Patrick, who had been one of my early running mentors and a fellow runner during the inaugural run.

Soon enough it was 7 pm and time to start.  I've had enough ultra starts that the low key nature of it didn't faze me.  Gil said his opening piece, the clock counted down, and it was time to go.

I started out easy - Bill Schultz' voice in my head with his words of wisdom about pacing.  It is hard to start out easy - especially when all of the faster runners bolt out and immediately start pulling ahead.  I need to do some self talk at this point to assure myself that the key to running strong later is to run slow and steady now. 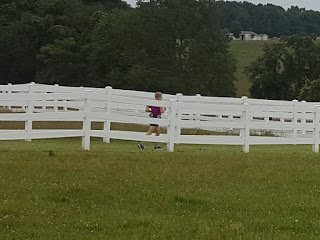 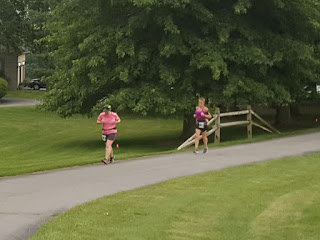 I am thrilled to find that nothing hurts.  As I've racked up my 100 plus mile weeks over the past couple of months, my glutes and hamstrings have been horribly tight and prone to painful pulls.  It seemed, though, that the gentle rolling uneven grassy terrain was a balm to those muscles that had faced repetitive motion on my asphalt training because everything loosened up nicely.  Sooner than I expected, I found myself in the zone.  Which is... not only was I running, but I found my inner runner.  I knew I could do this thing.  The joy was starting to come, as it almost always does as I start knocking off miles.  My head perfectly in tune with my body - this clump of grass, that hill, slow down just enough to keep the same level of effort... 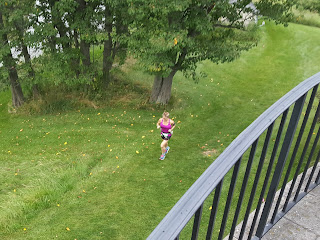 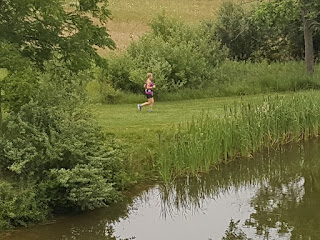 And then...  as I turned up the asphalt section, a few miles in, I hear someone call my name and it's Pat McHenry and his wife Karen.  Pat was here!  And he was cheering for me and taking pictures and all of a sudden my whole world got even a little bit brighter - as it does when the ultrarunners you really care about show their support.  I'm pretty sure I sped up just a little bit then, and never stopped.  (Thanks Pat!)

Last year I had run the tough hill towards the end of the loop for probably about half my laps before starting to walk it.  I decided this year to just run it until I couldn't.  So here is this thing about me and hills... I know a lot of people have the strategy of not "burning their matches" out on the hill - but for me I think hills almost give me energy.  As long as I run the hill slow enough that my effort is pretty similar to the flat, I get a burst of energy as I crest it, and all of a sudden I'm faster.  So... that's what I did.  Turns out.. for the whole race.  I never did end up walking that hill - even when it turned into a veritible mud fest.

Ah - the mud.  So - there was the mud on that hill, and then right after the first grassy downhill stretch.  Both sections were so bad that you really had to be careful not to lose your shoes OR go down in the mud.

This year's race was significantly cooler than last year's, which started out at about 88 degrees.  It was humid, but not hot, and I found myself perfectly comfortable with regard to temperature the whole time.  The one technical problem I was having was with my Garmin - somehow water had gotten inside it, and it was all fogged up.  This was really pissing me off because I couldn't get a good sense of my lap pace.  I realized later on, though, that it was, perhaps, a blessing in disguise.  By not watching the Garmin, I allowed my body rather than my head to dictate my "run forever" pace.

Dusk turned into evening and it was time to don the headlamp.  As one other runner has already mentioned, it was bug city as soon as that light went on.  Never in my life have I had so many bugs in my eyes, my hair and my mouth!  Protein...  It did seem to get better as the night wore on. This was a new playlist which I had created with Tony on one of our first long drives together, so it had a lot of meaning to me.  There were quite a few Avette Brothers songs, Sophie B Hawkins, Rickie Lee Jones, Suzanne Vega, Kate Bush, Bic Runga - and lots of other mellow.  I moved in and out of the music,running, running, running.

I was thrilled at how smooth and even my running felt.  I focused on form and cadence, and just kept letting my body dictate my pace.  Early on when I passed the timing board I was discouraged to see that I was in 26th place.  As time wore on, the numbers ticked down...  19th place... 14th place... 11....  9.  There came a point about 7 hours in when I was in 7th place trying to move into 6th and I snagged Gil to ask him if he knew how many women were in front of me.  "Yes" he said.  "Well how many?" I asked.  "None." he replied.  None.  NONE!  I was the lead woman with 5 hours left to race. This was a brand new thing for me and I have to say it put some spring into my step.  Now just to maintain steady for another 5 hours.  Which, at this point, I had no doubt that I could do.

It was special seeing Tony out there, going and going.  I'd run into him maybe once or twice an hour - either passing him or coming in opposite directions on the figure 8 loop.  He was walking strong and steady.  I also was happy whenever I passed folks I knew... Benn Griffin, Wanda and Bill, Vickey - who became familiar but whose name I didn't learn until the end... Amy Lord, Karen Markus, Tom Butler.

My goal for mileage was 60.  I found enough energy to sprint to the finish with 59.92 and was thrilled and grateful to be the female winner of the race and third overall.
I also want to thank Gil for yet another beautiful and perfectly run race - he's one of the best! 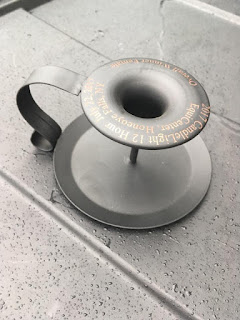 Amy Mower
I started running at age 29, after I quit a 2-pack-a-day smoking habit. I was worried about gaining weight, and so I committed to 30 minutes of regular exercise 3 days out of 4. I began running longer distances in 2008, when I joined my brother David and his wife Cindy in training for the Army 10-miler. I learned something pretty amazing - which is, to learn to run longer, you have to... run longer. Wow. What a concept. The 10 mile training was so exhilarating that I wanted to keep going, so I signed up for a February marathon. My sister-in-law had told me about the Jeff Galloway run-walk method, and I thought I might be able to finish a marathon if I followed that sort of a plan. It worked for me - and I used I to complete another 5 marathons over the next several years. I ran my first full marathon without walk breaks in June of 2014. I completed my first "ultra" marathon at CanLakes in October of 2015. Since that time I've completed 2 100'mile races, 3 24 hour's, several 12's, 48 hours at ARFTA, and most recently 72 hours at ATY. Presently I'm running 80-100 miles a week and setting my sights on more and possibly longer multi-day events.